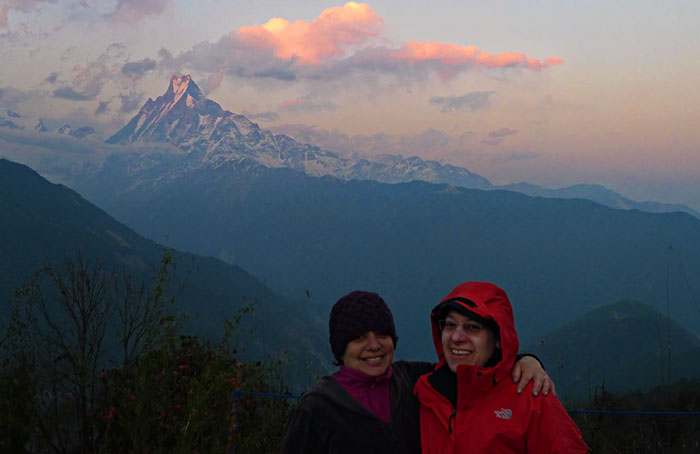 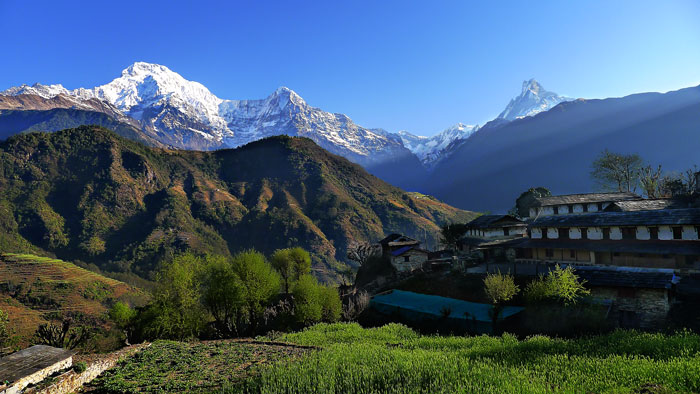 At 26,040 feet (8091 meters), the summit of Annapurna, tenth highest mountain in the world, is more than half a mile lower than the peak of Everest. Even so, Annapurna is the most dangerous mountain in the world to climb; only 153 climbers have ever made it to the top, and 58 have died trying.

Annapurna is a huge massif with five major peaks. Here, at left above the village of Ghandruk and its green fields of millet, is Annapurna South, elevation 23,684 feet (7219 meters). The spur to its right, known as Himchati, just under 23,000 feet high, was first climbed in the 1960s, by a Peace Corps volunteer stationed in Nepal.

The name Annapurna is Sanskrit; a literal translation is "full of food," or "well-rounded." It is associated traditionally with the feminine form and with goddesses of the kitchen and the harvest, and more generally with Lakshmi, Hindu goddess of wealth.

The rightmost mountain in the picture above is Machhapuchhare–Fishtail–sacred to the god Shiva and off-limits to climbers. It has never been summitted.

The village Ghandruk is a day's walk uphill from the nearest road, including a climb up a staircase containing–if the trail sign is to be believed–more than 8,000 stone steps. My sister struggled diligently to keep count but could neither confirm nor disprove the official number. I was much too winded to try anything as complicated as counting; all I could do was huff and puff and sweat and whine.

Ghandruk is a village of Ghurkas, the renowned warriors. Military service has entitled some of the Ghurkas to emigrate to Britain or to work in such far-flung places as Singapore, and it is said that the village's main source of income is remittances from abroad. One man told us his son was working as a policeman in Singapore; he also told us that in Ghandruk his son went by the name "Big Sexy."

A day's walk uphill from Ghandruk is a village called Tadapani, where Annapurna seemed much bigger and closer (below). The solar water heater on the roof of our inn was working fine, but there were way too many of us hoping for hot showers. We saw solar heaters and panels all over Nepal, even in places where poles and wires brought in power from the grid.

Also, everywhere we went, even in Kathmandu with its three million inhabitants, the practice of "load sharing" shut down the electricity every few hours. We were told that outages were according to schedule and that a schedule for the coming week could be read in the newspaper, but we never saw a schedule and were always caught by surprise. 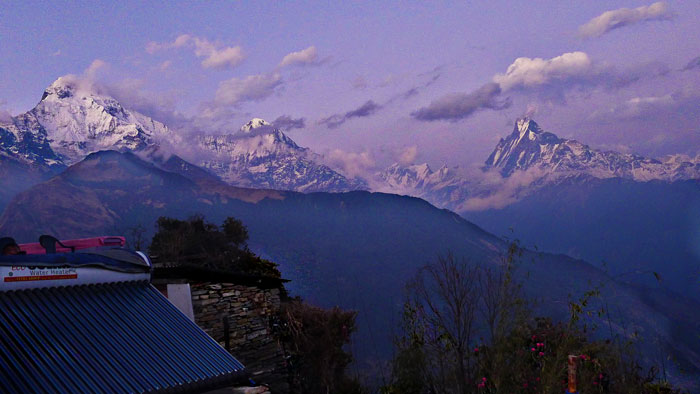 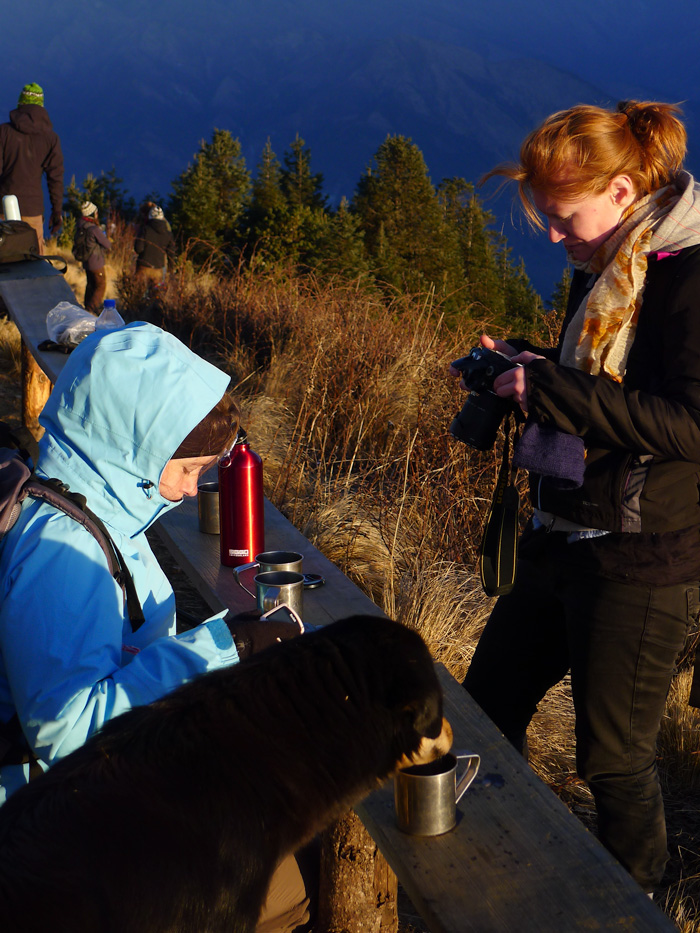 About a thousand feet straight up above the village of Ghorepani in Nepal's Annapurna region is the crest of Poon Hill, a vantage point where trekkers from around the world gather at dawn to watch the sun rise over the Himalayas.

Poon Hill is 10,500 feet above sea level, and it's cold there at dawn. Well before dawn, enterprising citizens of Ghorepani make huge vats of hot tea and carry them up the trail to sell to the trekkers. Here, a local dog shares a trekker's cup of tea.

Dogs are ubiquitous in Nepal. In the countryside, most of them look just like this one–medium-sized, square-headed, with a thick black coat and light tan markings. In the city of Kathmandu, the dog population exhibits more variety, but they still tend to be medium-sized, square-headed, and thick-coated. Dogs can be seen sleeping in the sun on sidewalks and streets all over the city. They live off garbage and scraps tossed out the back of restaurants and homes. They show no aggression toward humans and only a little toward other dogs; none of them, of course, is on a leash. Mostly, they sleep.

Cheese in Every Language 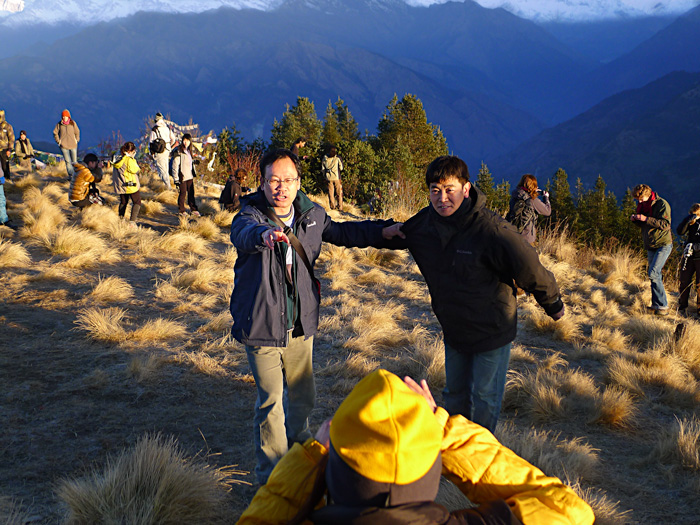 Trekkers come from literally all over the globe to watch the sun rise over the Himalayas from the top of Poon Hill. And then, as soon as the sun is bright enough, they all take pictures of each other.

We met trekkers from the Netherlands, Australia, Israel, France, Japan, Ireland, Germany, and probably some other countries I've forgotten. The group in the foreground here was from China.

Very few came from the United States. Americans generally don't have the vacation time or the "hillwalking" tradition shared by the Europeans. However, patterns of tourism are changing; in the resort city of Pokhara, which we visited after our trek, we met a tour group of senior citizens from New Jersey.