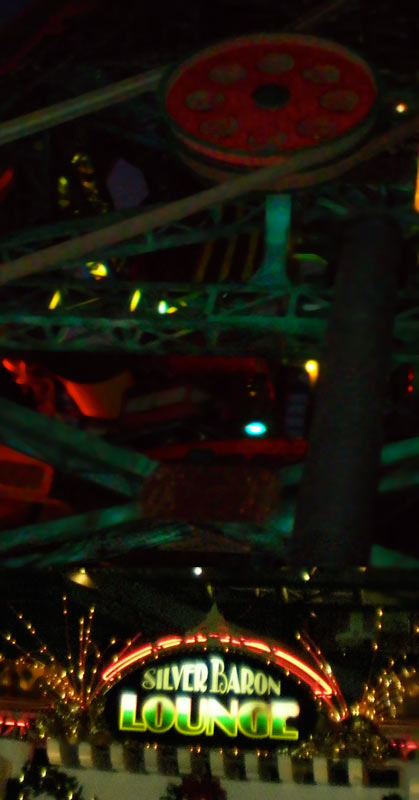 It may be Christmas, but the Silver Baron and all the dozens of other casinos in Reno, Nevada, are wide open for business. Nevada wouldn't be Nevada if people fretted over the propriety of parting fools from their money on Christmas or any other day.

But last weekend, with Christmas travel already in full swing, Reno looked almost lifeless by day and barely half-alive at night. As industries go, gambling must be somewhat recession-proof, but it takes money to get to Reno and to stay in the hotels there, so these days gamblers may be doing more of their gambling closer to home. I don't know if that's the explanation; maybe it's a trendiness thing, with Reno seriously losing out to Vegas. Whatever, the town is not flourishing.

Many of the casinos in Reno, including the Silver Baron, are partly or entirely underground, occupying land excavated more than a hundred years ago, back when Nevadans sought their silver deep in the ground rather than in the pockets of tourists. Silver-mining is the architectural motif of the town. Above the Silver Baron is a dome filled with fake mining machinery. Near the dome is a concert hall, where the Doobie Brothers will be playing for New Year's Eve.

Allen and his teammates from the Naval Academy wrestled in a tournament in Reno last Sunday. Their performance overall was disappointing, and the coaches got so annoyed they were yelling even when the Midshipmen won their matches. Afterwards, Allen treated me to a little blackjack in one of the casinos, and my performance would have been extremely disappointing were it not so completely predictable. 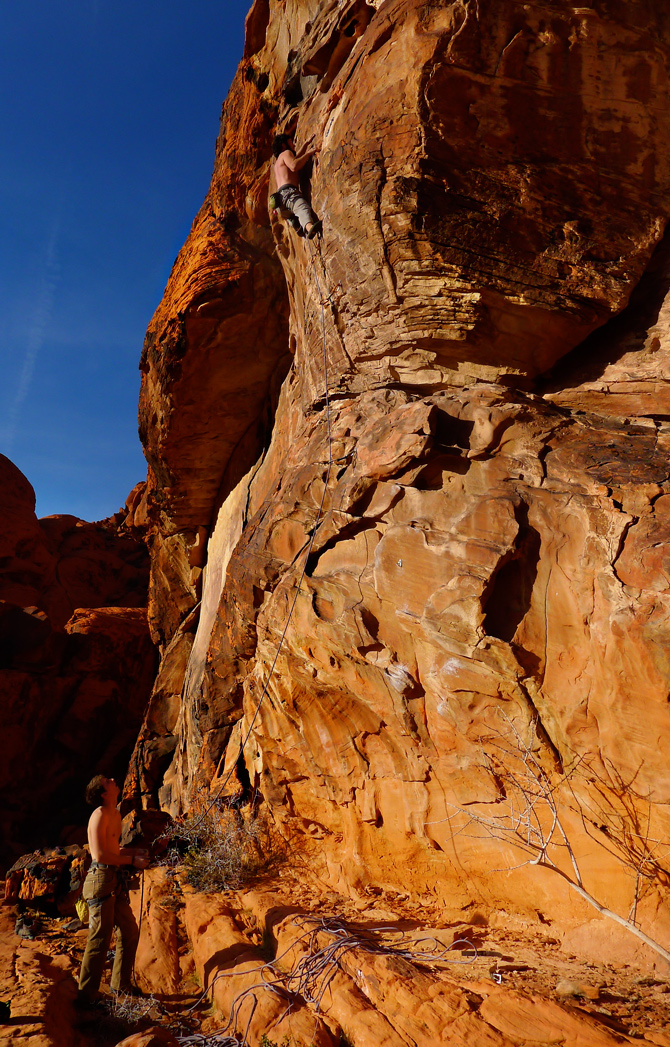 Bunch a guys were off climbing last week in Red Rock Canyon, a few miles west of Las Vegas, Nevada. Here, Hank leads the route, carefully placing little thingamajigs in cracks to hold the rope so other climbers can follow him safely. As lead climber, Hank is roped in, but not quite as safely as the followers; if he loses his grip on the rock, the thingamabobs below him should arrest his fall (with the help of the belayer down on the ground), but before they do, he could expect to fall twice the distance down to the topmost thingamabob. He didn't fall.

The red rock here is the Aztec Sandstone formation, Jurassic in age. Overlaying it in much of the canyon is a dark gray limestone, the much, much older Bonanza King limestone, from the Cambrian era. The older limestone got shoved up on top of the younger sandstone late in the era of the dinosaurs, when tectonic plates were compressing this part of the world, pushing up mountain ranges.

Late in the day, Pat is still working his way up. 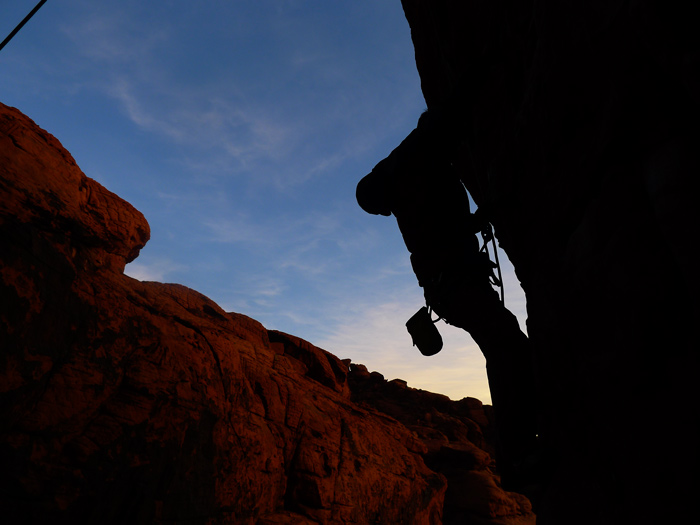 Back at the Bottom 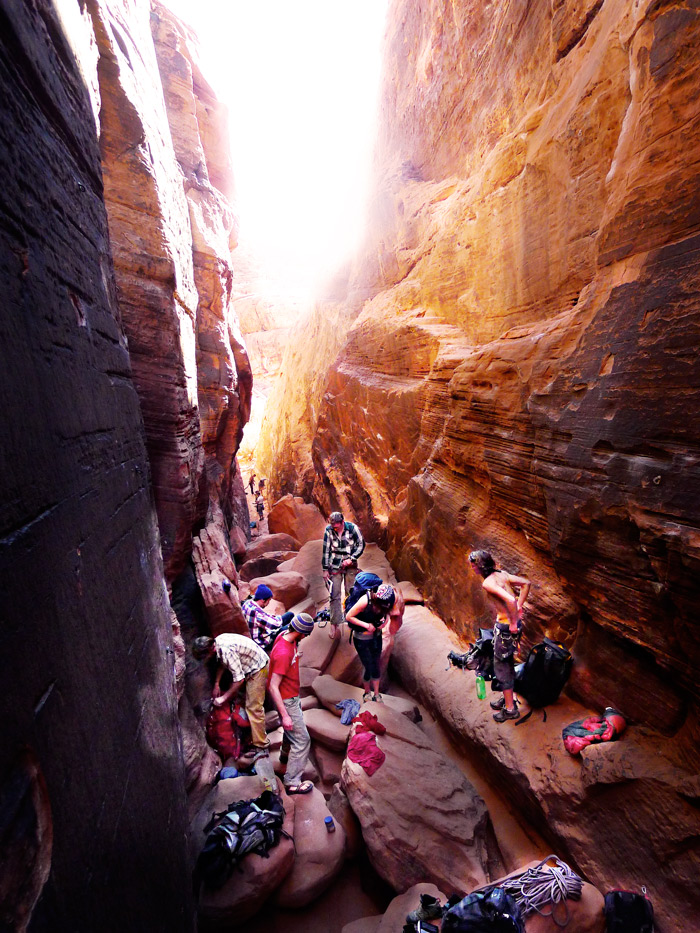 Climbers retrieve their packs and stow their gear after a day on the rocks in Red Rock Canyon, Nevada.

Not Kilroy, actually, but Ygarzabal, and Laxague and Goytia and Ibarriet. The writing on the trees is perfectly clear, if you can read Euskara, the Basque tongue: "Felix Arospide was here in 1897." "Josto Sarria, August 1962."

"Long live the sheepherders," proclaims a tree in Elko County, Nevada, "the ones who can take this place."

Wherever there have been sheep in the mountainous parts of the American West, there have been sheepherders from the Basque country of Europe. And for well over a century now, in the aspen groves at the edges of high country sheep meadows, names and dates and drawings and even poetry have been carved into the aspens, some of the text in Spanish, a little in French, but much in Euskara, a language long forbidden by government officials back home in France and Spain.

Gora Euskadi! read many of the inscriptions. "Long live the Basques."

But a more common carving is Biba ni! "Hooray for me."

And most common of all are sentiments along these lines: "Hooray for the whores of America. Long live the whores of Biscay as well!"

Most Basque shepherds in the United States were not shepherds back in Europe, and Basque people back in Europe did not carve pictures and smutty sayings into the bark of Basque trees. In America, however, the loneliness and tedium of life in the wilderness with sheep led resourceful people to innovate. For example, on a mountainside above Lake Tahoe, at the edge of a meadow with a multi-million-dollar view, a shepherd took his knife to a large aspen and inscribed: "I'm bored and we sheepherders lack a woman."

Aspen trees live no more than about eighty years, and the trees selected for carving were usually large and already mature. Old-style sheepherding ended in America around 1970, so most of the Basque carvings are dead or dying now, falling to the ground and rotting.

"I am not coming back here," says one sun-bleached log near a Montana lake. "Except to fish, maybe."