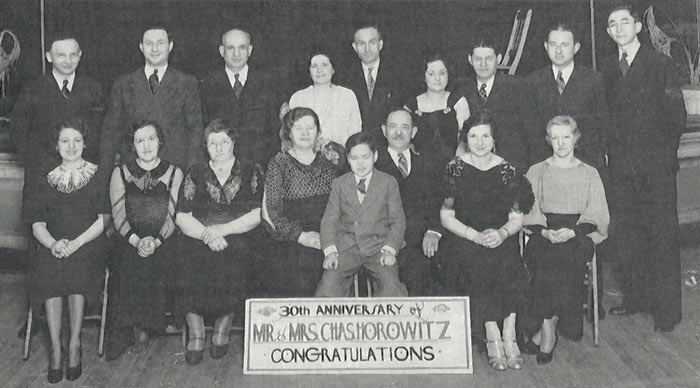 In 1935, when my father's parents Rose and Charles Horowitz celebrated their thirtieth anniversary, the basic fact of life in America was the Great Depression. Still, to mark the occasion properly, you had to dress up and sit for a formal portrait.

That's Rose and Charles in the middle, of course, with my father, Bobby, the baby of the family, on their laps. He is 85 now and may be the only person in the picture who's still alive. Fortunately, he noted who's who and described everybody for posterity--the woman at the far right, for example, is "cousin Hattie, who became the first radio cab dispatcher in Baltimore."

Three of my father's four siblings are shown here, with their spouses, along with assorted relatives and friends.

Sitting next to my grandmother is her sister Bessie, and standing behind Bessie is Uncle Eli, the subject of today's post. Back in eastern Europe before the turn of the century, Eli had been conscripted into the czar's army and ordered to Siberia;  he deserted and somehow found his way to Philadelphia instead, There, he got a job as a furrier, married Bessie, and raised five children. They were poor; my father recalled that in Eli and Bessie's house, he had to be very careful not to use too much soap when he washed his hands.

Some years after this picture was taken, when Eli and Bessie were celebrating their own fiftieth anniversary, Eli went out on the floor with all the young guys and danced the Kazachok, the Russian squatting-and-kicking dance. The family story is that he kicked as hard and danced as fast and lasted as long as anybody half his age. He had a talent for enjoying life, including his schnapps. One of his sons became a doctor, who warned his father not to drink too much; the  story is that when the son ordered him to cut back to one glass a day, Eli said fine, but he made sure that his one daily glass was a huge water-tumbler-sized drink. Whatever, he outlived his son the doctor.

Eli had a one-word retirement plan: fishing. And that's exactly what he did; when he was finally too old to stay at work sewing furs, he and Bessie moved to Atlantic City, where every morning he woke up, walked down to the beach, and went fishing. He was in his nineties when I first met him, still the life of the party, and still fishing.