Where cars and trains and planes and toasters and rebar all were born, back in the day 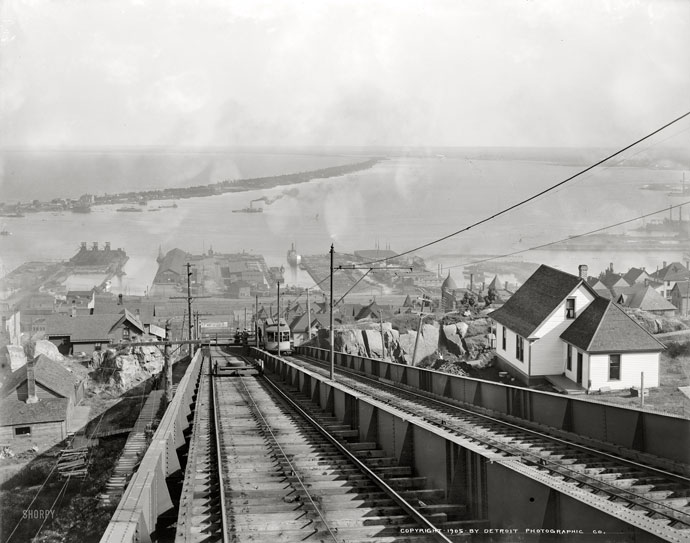 After some of you fussed yesterday about the lack of a story to go with the picture, I've got a story for today--the beginning of a two-part story, in fact. It could be classified as another entry in an irregular series dealing with places I've never been to and probably have no business writing about.

The picture looks down on the harbor of Duluth, Minnesota, in 1905, from a vantage point near the top of the city's new inclined railway. The railway may look like part of the town's extensive industrial infrastructure, but it was actually a people-mover, built by the city in the late ninteenth century at the instigation of real-estate developers who wanted to sell houses high up the hill above downtown. "The Incline" operated for about 50 years, powered by an electric motor at the top and working a little like an elevator, with a dummy-car counterweight on the left track that moved downhill when the passenger car on the right track was pulled uphill.

What I didn't know about Duluth could fill several hard drives. Here's what little I did know: it's Bob Dylan's hometown, and the winters are ridiculously cold. The Dylan factoid is only partly true--yes, he was born in Duluth, but he really grew up a hundred miles north in Hibbing, Minnesota, a mining town that had to relocate itself because the mine got too big. As for the factoid about Duluth winters: yes, of course, they really are brutal, with a spell of forty below or worse most years. But "the Incline" was so steep that snow never piled up too deeply on the tracks, not even during blizzards.

As for the things I  didn't know about Duluth: Number one, around the time of this photo, it was among the wealthiest towns in America, claiming more millionaires per capita than anyplace else. It thrived because of a confluence of geology, geography, and the highest technology of the era.

In the 1870s, northern Minnesota had a gold rush; no commercially significant gold was ever found, but the prospectors did stumble on high-grade iron ore in the hills north of Duluth. They'd discovered Minnesota's Iron Range, one of the largest iron deposits on earth and the subject of tomorrow's part of the story.

By the 1880s, Duluth and the Iron Range were connected by railroad. Ore from the mines was off-loaded from the trains at Duluth onto large ships. The ships would have been stuck forever in Lake Superior, unable to exit, had not construction been completed around that time on the mechanized locks at Sault Ste. Marie, which helped ships to descend the 21 feet between Lake Superior and Lake Huron. The ore ships from Duluth sailed a thousand miles across the Great Lakes to the newly constructed steel mills in Indiana and Pennsylvania and Ohio and New York, where newly invented Hulett machines automatically unloaded the ore from the ships and dumped it into blast furnaces. As soon as the new steel cooled, it was snapped up by new factories assembling cars and tractors and locomotives and wringer washing machines and everything else that used to be made in America.

All cities that boom must implode. (I don't know if that's true, but it sounds about right.) What happened to Duluth was World War II, with its extreme demand for iron ore to build tanks and planes and ships to replace the ones that were being consumed in battle.  The Iron Range couldn't keep up; huge wartime scrap-metal drives were needed to supplement the mines.The track of the inclined railway was itself torn up and sold for scrap. By about 1950, all the good ore in the entire Iron Range had been clawed out of the earth and shipped away through Duluth. The city languished.

Fortunately, scientists at the University of Minnesota had seen this coming and were hard at work on a work-around.  Within a few years they came up with a way of using the Iron Range's low-grade ore, called taconite, Taconite isn't as valuable as the old stuff, and it has to be compete with cheap ore now coming in from places like Brazil, and anyway, most of the old steel mills and factories are no longer operating, but Duluth remains a fairly active port to this day. Last year, it handled 500,000 railroad carloads of taconite. The railroad also brings grain to Duluth from all across the northern Plains, which also gets loaded there onto ships.

But nowadays, more valuable than wheat or taconite to Duluth's economy are tourists. Now that the smoke is gone from the old ore processing works, the city's scenic lakeside setting attracts vacationers interested in all the outdoor activities of the north country: boating, fishing, hunting, snowmobiling, and so on. Along the top of the hill is a string of popular state parks. Even the sand bar that protects the harbor, seen in the distance in the photo, is now a park, and also a seaplane base. Visitors are buying up the old houses on the side of the hill to use as vacation homes.

Somewhere in the city, I can't figure out where, is a trail they've named the Bob Dylan Walking Path. Must be near Highway 61.