The Madagascans have a word for it 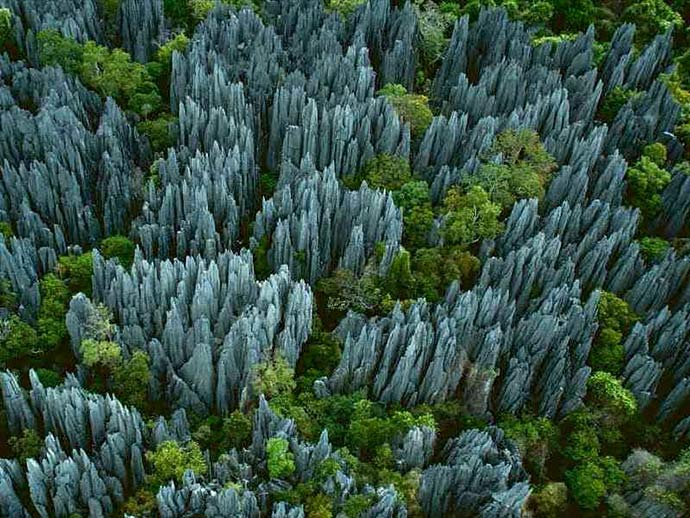 Tsingys. Which means: the kind of place where you don't want to walk barefoot.

We use the German word, karst, as a general term for tsingys and other less extreme landscapes carved by the chemical interaction of limestone and rainwater. Limestone is oceanic in origin, formed at the bottom of the sea from the shells of dead sea creatures. When tectonic forces thrust the seafloor up onto dry land, rainwater immediately begins chewing away at it, in a chemical reaction something like the vinegar-and-baking-soda volcano of an elementary school science project.

Monsoon rains have been attacking the Jurassic limestone bedrock of western Madagascar for millions of years, dissolving channels in the surface and opening up caverns underground. Eventually, as the caverns expand, the rock above tthem collapses, forming sinkholes. The sinkholes enlarge along fissues and underground drainage channels, eventually forming steep-sided  "solution valleys." The rains continue to eat away at the rock between the valleys, until all that is left is raggedy spikes. Tsingys.

It's so hard to get around in this landscape that the flora and fauna have yet to be catalogued. Even animals and plants have a hard time traveling here; they live in micro-ecosystems that have evolved in isolation from one another as well as from the rest of the world.

Ten percent of the earth's surface is karst, but most of it is too young or too arid to develop the extreme features of the tsingys. But all karst is evolving slowly or rapidly toward the kind of landscape seen here. It will be kind of a shame in a few million years when Florida gets to looking like this; who's going to want to visit beaches where you can no longer walk barefoot?