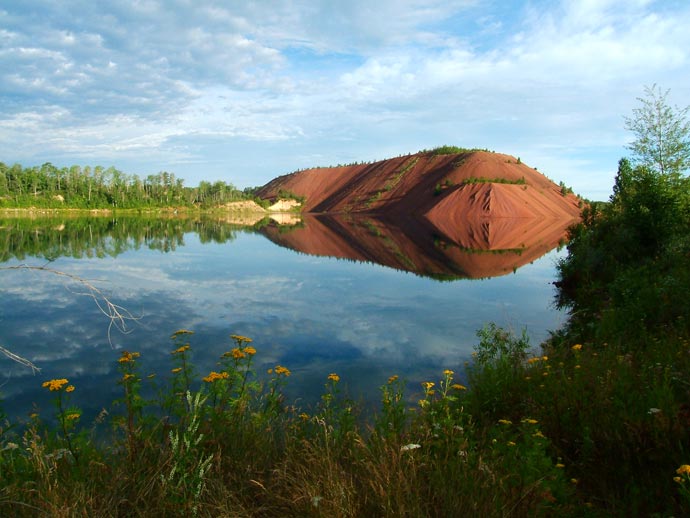 This now quiet flooded hole in the ground was once part of the world's largest open pit iron mine, near Bob Dylan's boyhood home in Hibbing, Minnesota. One-fourth of all the steel ever made in the United States used iron ore from this one mine. The ore sat here for two billion years unmolested, waiting for oxygen to appear in the atmosphere, for life to appear on the surface of earth, and for that life to evolve sufficiently to dig all the iron out of the earth. The digging took about 50 years.

They don't make these big iron deposits any more. Now that the air has oxygen in it, iron will rust away instead of piling up like grains of sand. There are natural processes nowadays that manage to accumulate some iron despite the atmosphere, but they operate on a much, much smaller scale.

Minnesota's Iron Range is what's called a Banded Iron Formation, a BIF. There are fewer than a dozen large BIFs around the world, in Minnesota, Africa, Russia, Australia, Venezuela, Brazil, and Labrador. They are all at least a billion years old; the biggest ones are around two billion years old.

Two billion years is also the age of some of the oldest life forms preserved in the fossil record, organisms called cyanobacteria, ancestors of modern algae. Vast "mats" of cyanobacteria fossils have been found near Hibbing and near many of the world's other banded iron formations.

Here's one theory: cyanobacteria, sometimes called blue-green algae, were capable of photosynthesis. Like modern plants, they gave off oxygen, which accumulated in the atmosphere and the ocean. The cyanobacteria lived in the ocean, probably near the surface, and the ocean water contained high concentrations of iron, probably leached from early volcanic rocks. Photosynthesis added oxygen to the ocean, which made the iron precipitate out of solution, sinking to the bottom. The iron sediment piled up, and we got our BIFs.

But there's a catch: cyanobacteria are anoxic organisms, which evolved and apparently thrived in a world without oxygen in the air. Their own behavior--photosynthesis--may have contributed to atmospheric changes that literally poisoned them. In other words, they may have caused their own extinction. It may have been a mass extinction, which could explain the huge mats of fossilized cyanobacteria associated with BIFs.

It's hard to imagine how the cyanobacteria could have avoided their fate; they are single-celled organisms with little more brainpower than some of our contemporary politicians. A few varieties did evolve to survive in anoxic niche environments, such as hot mineral springs, but overall their way of life was unsustainable.

Which raises the obvious question: can we humans do any better? As our way of life leads to changes in the atmosphere, can we evolve to survive on an overheated planet? And/or are we smart enough to control the atmosphere to make it more favorable to survival of our species?