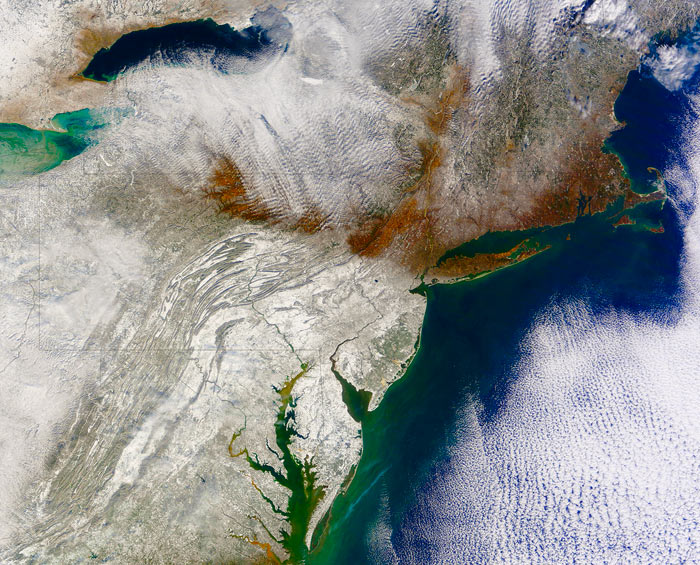 The first step in making sense of this image is distinguishing the two kinds of white stuff, clouds and snow. There's a big area of clouds over the Atlantic Ocean at the right edge of the picture, especially in the lower right, and another batch of clouds near the top of the image, streaming southeastward from Lake Ontario. The two cloud regions are connected in the upper right corner by a puffy little cloud bridge over . . . Portland, Maine. But that's irrelevant to the main point.

The edge of the snow line is obvious, running almost straight westward from Long Island and New York City, and it's completely upside down and backwards. North of the snow line, bare ground and leafless brown trees are clearly visible to the sensors of a satellite hundreds of miles out in space. South of the line, the satellite registers bright white ground, buried deep in snow.

This is not how winter is supposed to be in the eastern United States, but in 2010, this is the pattern that held steady through most of January and February. It is just now breaking up, though there's still something of an upside-down snow line in northern New England.

What went wrong? Part of the blame lies with Greenland. Normally, a dome of dry, cold, heavy air sits over Greenland all winter long, known as the Greenland High. Storms in the Atlantic can't punch through this high pressure, so they steer around it, generally tracking up the coast alongside New England and into the Canadian Maritime provinces. This year, the Greenland High was diffuse and deformed and further south than usual, with a well-developed ridge near the North American mainland, far from its usual core. Storms crawling up the mid-Atlantic coast slammed into the high-pressure ridge and couldn't go any further; they wore themselves out dumping snow on Virginia and Maryland and New Jersey and Pennsylvania.

To compound the trouble, this was an El Nino year, meaning there were lots of storms with lots of moisture.

Does this have anything to do with global warming? Of course it does, but it will be years or maybe decades before the details of the relationship become clear. When a winter is snowier than average, or less snowy than average, or a high pressure feature is shifted out of its typical position--that's weather, not necessarily climate. There's always weather, blips and static that obscure the deeper patterns arising from long-term trends in climate. Only over time can the climatic signal be recognized amidst the weather-related noise.

Meanwhile, the snow in this picture highlights a completely unrelated geological phenomenon. Notice the snowy folds of the Appalachian Mountains, ridge upon ridge, all trending northeast-southwest. The Appalachians are hundreds of millions of years old, dating back to the tectonic processes that created Pangaea and then ripped it apart. If you click on the picture to get a larger version, you should be able to see three black snakey lines, rivers that cut right across all the mountains--the Potomac, the Susquehanna, and the Delaware. Does that make sense? Wouldn't it be more logical for big rivers to follow the valleys instead of ignoring the valleys and flowing across the mountains?

This unusual river behavior has been talked about for centuries; Thomas Jefferson wrote that the place where the Potomac cuts through mountains near Harpers Ferry, West Virginia, was worth crossing the ocean to see. The place where the Delaware River splits a mountain range--the Delaware Water Gap--has been declared a national park.

How does it happen? It's a complicated story. The Appalachians are basically several mountain chains jammed together side by side. The westernmost chain is among the oldest, now quite eroded, but it was once high and steep, like the Alps. Big rivers formed to drain the high country. Later, as tectonic rifting opened the Atlantic basin, new mountains gradually emerged east of the original range. The big, powerful rivers draining the old mountains were strong enough to cut through the rising land, and so they held onto their river beds even as the mountains rose around them.