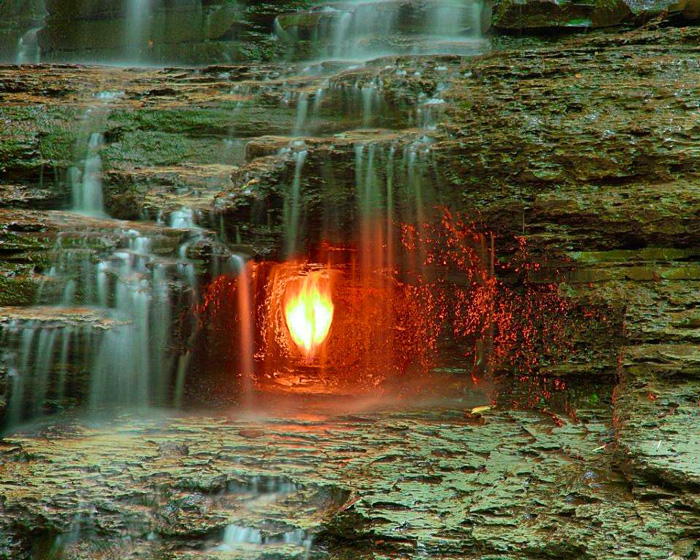 History has not recorded the name of the first person to light a fire in the little grotto behind the waterfall in Shale Creek gorge, now part of Chestnut Ridge Park recreation area in Erie County, New York, near Buffalo.

Despite the name of the place–Eternal Flame Falls–neither the flame nor the waterflow is perennial. Shale Creek is an intermittent stream, drying up to a trickle except during snowmelt and days of very heavy rain. The methane gas that fuels the flame is always present–it is produced by rotting vegetation trapped in the shale, and it bubbles up through fissures at several places along the creek, notably into a natural alcove large enough to keep the flame dry behind the watery curtain of the falls. But the flame does go out sometimes, if the wind is gusty or the waterflow especially drenching.

The greenish-gray rocks here are part of a formation called Hanover Shale, roughly 380 million years old. Where this shale is at or near the surface, as here, any gas it contains will simply ooze out into the atmosphere, making it economically worthless; in places where the Hanover Shale is buried deep underneath other rocks, however, its gas is trapped under great pressure and may be worth drilling for.