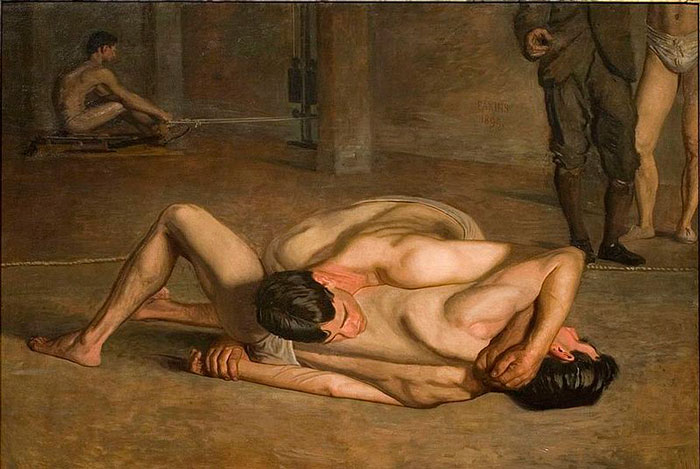 In the 1890s, when Thomas Eakins was teaching painting and anatomy at the Philadelphia Academy of Art, he spent a lot of time hanging around a local gym, watching the anatomy in action. This painting, "The Wrestlers," the final work in Eakins's sporting series, features not only a stylized moment in a wrestling match, very close to a final pin, but also some background characters watching and working and teaching and learning. In particular, the man in street clothes who is pointing at the wrestlers has been compared to Eakins himself--the coach in the gym, like the art instructor in the studio, draws attention to the wrestling action in hopes of elucidating salient matters of craft and human dynamics.

In 2011, meanwhile, wrestling season is again upon us, and one of the Stein wrestlers has stepped away from the gym for a few moments to share with us some observations about the Eakins wrestlers. "The guy on bottom," notes Allen, "should not be trying to peel the fingers off of the offensive opponent. He will be better off planting his right foot on the ground and arching on his head and trying to punch through back to his belly."

Coach in the background may be making the same point. But Mr. Eakins, the guy with the paintbrush--the guy in charge--apparently liked both these wrestlers exactly as they are.