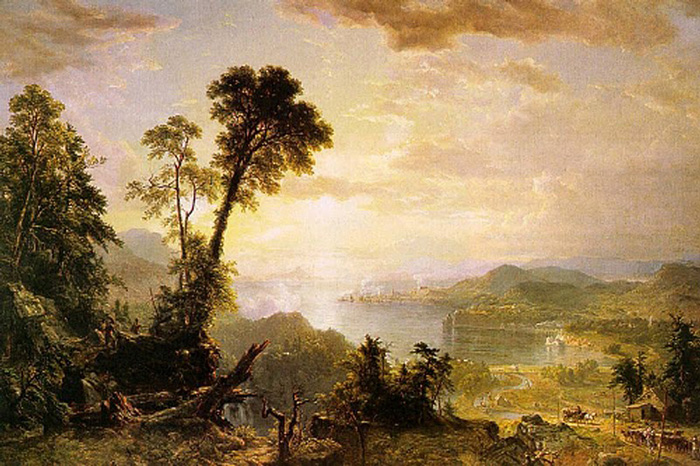 One of the masterworks of early American art, Asher B. Durand's massive 1853 oil painting "Progress (The Advance of Civilization)," has been sold privately to an unknown buyer, perhaps Bill Gates, and has disappeared from public view after almost half a century on display in Tuscaloosa, Alabama. The sale price may have been in the range of $50 million.

The details of the painting, which are very difficult to make out in this digital reproduction, utilize landscape to represent time. There is wilderness in the foreground, where Indians stand on the rocks looking way off into the distance. The middle distance is pastoral: fields of grain, country roads, a horse-drawn wagon. Far off in the background is a new railroad trestle and a train, its engine belching smoke. The Indians are still standing in the forest primeval, but already, they and their paradise are so last week.

I remember writing a paper on this kind of symbolism in college, as did a million other students. It all has something to do with a new American way of looking at nature: Old World artists painted romantic landscapes in which the ruined stones of ancient buildings were being reclaimed by the forest, whereas in American landscapes, fresh civilization was intruding into nature. Either way, the story was somehow sad.

The story of what happened to the Durand painting this year is also sad, and the lesson it illustrates could be taken to implicate both nature and civilization: i.e., human nature.

About fifty years ago, Jonathan "Jack" Warner, the wealthy owner of Gulf States Paper Company in Alabama, started collecting art, mostly American art. He bought original Audubon prints and put them up in the company cafeteria. He bought paintings by Winslow Homer, Georgia O'Keefe, Andrew Wyeth, Edward Hopper, Mary Cassatt, James Whistler, Edward Bierstadt, Gilbert Stuart, and dozens of others; he kept many of the paintings at home but decorated the walls of corporate headquarters with many others. Eventually, he built a museum for the collection.

The museum was open to the public, but it was still a private collection, funded in large measure with corporate money. Warner had a good eye for art and also apparently a good nose for a bargain, and eventually the art collection came to represent many tens of millions of dollars of corporate assets. He set up a foundation to manage the collection, but ownership remained substantially with the company.

And he turned over corporate leadership to his son. "That was a huge mistake," he said recently. "I think about that every day."

Warner's son, Jonathan "Jon" Warner, remade the family business, changing its name to Westervelt Company, selling off its paper mill and focusing on forest management and renewable energy. Early this year, plans were announced to build a plant in west Alabama to manufacture wood pellets for export to Germany.

Building the wood-pellet plant will cost about $50 million. The Durand painting may have fetched that much, even in the somewhat depressed art market that has lingered since the financial crisis and recession.

In fact, the recession has made the painting much more valuable to a corporate entity like Westervelt. One of the provisions of the 2010 Stimulus Act provided for a one-year capital-gains tax break for companies selling assets not related to their core business.

The Warner collection curators say they came in to the museum one Monday morning and found blank spots on the wall where many of the paintings had been. Westervelt's board of directors had voted to sell the art.

Jack Warner did manage to keep a large part of his collection intact, and he has created an organization called the Tuscaloosa Museum of Art to eventually display it. In the meantime, several dozen of the paintings make up a traveling show that has been exhibited in London and is now at the University of Pennsylvania's Ross Gallery in Philadelphia.

Speculation as to the buyer of "Progress" has focused on two deep-pocket collectors who are known to be interested in American art: Alice Walton, of the Wal-Mart fortune, and Bill Gates. Jack Warner's wife personally called Ms. Walton and was told that no, she did not buy the picture. It has also been reported that Gates has denied the purchase, but some sources say that he always issues denials and that it is exactly the kind of painting he would want.

Gone with the wind, our Progress is.