Farmland from on high 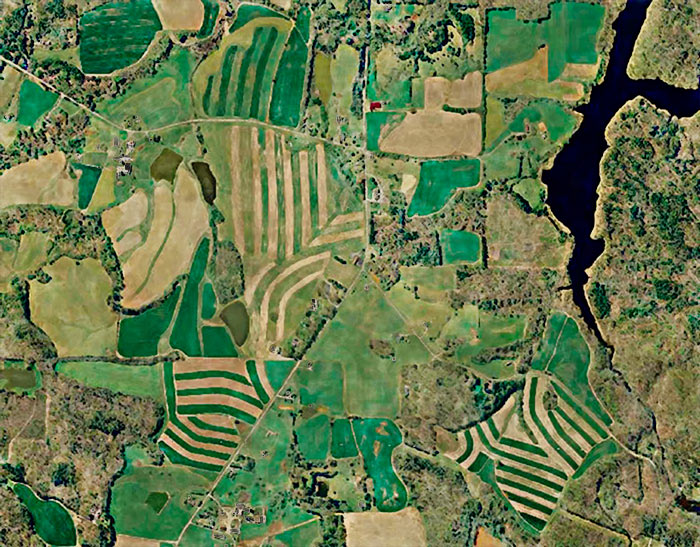 Every summer, the U.S. Department of Agriculture contracts with pilots around the country to fly over every square inch of American farmland taking pictures. They use the imagery to figure out how well crops are growing, and exactly how much land is being used for various kinds of crops. But more importantly, they turn the imagery over to state government GIS departments, which have come up with thousands of uses for seamlessly mosaicked pictures of almost all the land in the United States.

The pictures show roads and cities and lakes and rivers, of course, as well as farm fields, so they make good base data for maps. They show changes in the landscape--e.g., new subdivisions and drained wetlands. Infrared bands in the imagery can show all sorts of details, including how much sediment there is in a river and how quickly a forest is coming back after a fire.

This picture started out as hazy USDA imagery from Orange County, North Carolina. I turned it upside down--south is now at the top--to make the shadows look "normal"--flip it back 180 degrees and see for yourself how strange it looks; the wooded areas, with all their shadows, look like sunken green and brown depressions amid smooth, raised crop fields. That's because our eyes have been "trained" by centuries of hand-shaded maps to expect the source of "light" to be in the upper-left corner, even though in real life the sun is never in the northwest quadrant of the sky (except down under, in the southern hemisphere). This is one of many reasons why satellite and aerial images, while fascinating to look at and extremely helpful in mapmaking, do not themselves make attractive backgrounds for maps. Unless we can accustom ourselves to putting south at the top.....

(Image removed at the request of the photographer, Cris Benton)

This view of Drake's Beach at Point Reyes National Seashore in California is another example of kite photography, one of the oldest applications of the photo arts.

During the American Civil War, kites and balloons were used to hoist cameras, and sometimes also cameramen, for spying expeditions. Kite photography was also used to survey the damage after San Francisco's 1906 earthquake and fire.

Planes and satellites, of course, have relegated kite photography to niche status. On the other hand, modern digital cameras and wireless control technology have become so lightweight and inexpensive that it's a readily accessible niche.

Calm Before the Storm 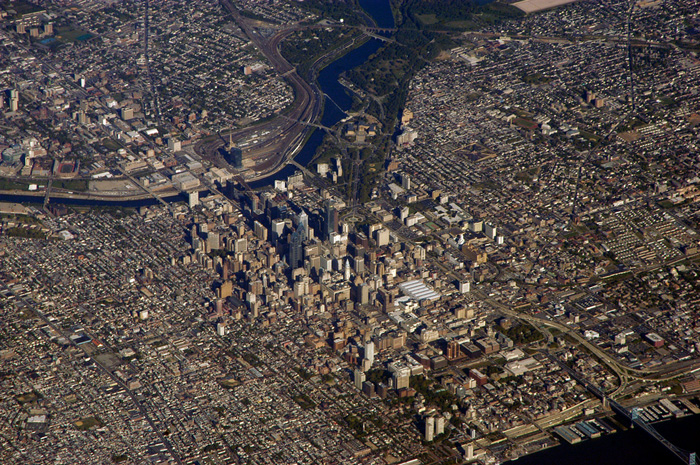 Is there some kind of bullseye painted across the rooftops of Philadelphia? We are told that this Hurricane Sandy storm-creature is aiming straight at us and will not rest till it rakes us with its cold, cold eye.

Until further notice then: to find my house, start from the bridge closest to the lefthand edge of the picture and trace about six blocks along the streets that angle downard and toward the right. Amongst all the rowhouses of the neighborhood, you may be able to make out a larger orange building with a dark roof; that's a church known as Apostolic Square, just a block and a half from our house.

Although both the rivers seen here are technically tidal–at least as far upstream as the dam near the art museum in the parkland above the center of the photo–the city is far inland and is not likely to get much storm surge. And it appears we won't be eligible for any of the snow this time. But school and garbage pickup have already been canceled, and there's rain on the roof. 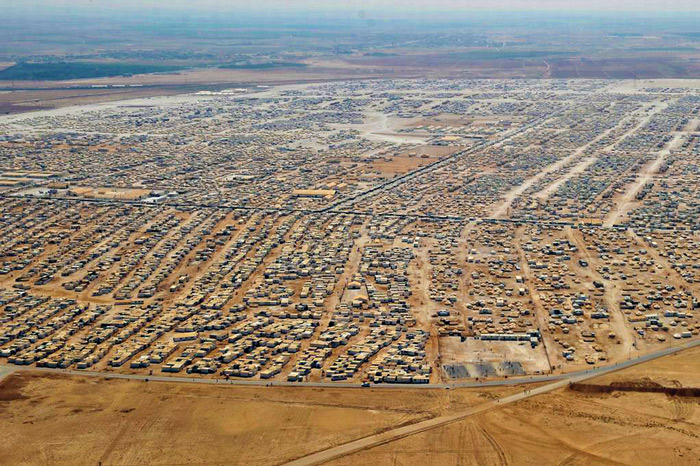 This camp at Zaatari in northern Jordan just marked its first anniversary. Refugees fleeing the Syrian civil war have flooded in so fast that attempts at accurate headcounts have been abandoned. Back in March and April, when the fighting was especially intense, the influx from Syria was estimated at 5,000 to 10,000 new refugees every day.

The current camp population is believed to be approximately 144,000, making Zaatari the fourth largest community in Jordan.